“No two persons ever read the same book.” – Edmund Wilson

Read the book & Solve the Mystery!
Books are distributed at the previous month’s discussion, or check one out at the library.

Subscribe to our email newsletter via email to keep informed of what’s happening at
your library for Adults.

The Heist by Janet Evanovich with Lee Goldberg
Fox & O'Hare book #1
FBI Special Agent Kate O'Hare is known for her fierce dedication and discipline on the job, chasing down the world's most wanted criminals and putting them behind bars. Her boss thinks she is tenacious and ambitious; her friends think she is tough, stubborn, and maybe even a bit obsessed. And while Kate has made quite a name for herself for the past five years the only name she's cared about is Nicolas Fox--an international crook she wants in more ways than one.  Audacious, handsome, and dangerously charming, Nicolas Fox is a natural con man, notorious for running elaborate scams on very high-profile people. At first he did it for the money. Now he does it for the thrill. He knows that the FBI has been hot on his trail--particularly Kate O'Hare, who has been watching his every move. For Nick, there's no greater rush than being pursued by a beautiful woman . . . even one who aims to lock him up. But just when it seems that Nicolas Fox has been captured for good, he pulls off his greatest con of all: He convinces the FBI to offer him a job, working side by side with Special Agent Kate O'Hare.  Problem is, teaming up to stop a corrupt investment banker who's hiding on a private island in Indonesia is going to test O'Hare's patience and Fox's skill. Not to mention the skills of their ragtag team made up of flamboyant actors, wanted wheelmen, and Kate's dad. High-speed chases, pirates, and Toblerone bars are all in a day's work . . . if O'Hare and Fox don't kill each other first.
Wednesday, December 9  |  10:00 am
Louisburg City Hall |  215 S. Broadway St, Louisburg
& via Zoom - contact Holly for Zoom information

2021 Schedule
This schedule is subject to change as needed.

Celebrate the New Year!
Start the New Year with food, fun, friends, new people, and a discussion of what everyone has read over the holiday season.
Wednesday, January 13  |  11:00 am
Timbercreek Bar & Grill  |  14 E. Amity St. Louisburg& via Zoom - contact Holly for Zoom information

Before We Were Yours by Lisa Wingate
"Memphis, Tennessee, 1936. The five Foss children find their lives changed forever when their parents leave them alone ... one stormy night. Rill Foss ... must protect her four younger siblings as they are wrenched from their home on the Mississippi and thrown into the care of the infamous Georgia Tann, director of the Tennessee Children's Home Society. South Carolina, present day. Avery Stafford has lived a charmed life. Loving daughter to her father, a U.S. senator, she has a promising career as an assistant D.A. in Baltimore and is engaged to her best friend. But when Avery comes home to help her father weather a health crisis and a political attack, a chance encounter with a stranger leaves her deeply shaken"-- Provided by publisher of regular-print edition.
Wednesday, February 10  |  10:00 am
TBA & via Zoom - contact Holly for Zoom information

As Long As We Both Shall Live by JoAnn Chaney
"What happens when you're really, truly done making your marriage work? You can't be married to someone without sometimes wanting to bash them over the head... As Long As We Both Shall Live is JoAnn Chaney's wicked, masterful examination of a marriage gone very wrong, a marriage with lots of secrets... "My wife! I think she's dead!" Matt frantically tells park rangers that he and his wife, Marie, were hiking when she fell off a cliff into the raging river below. They start a search, but they aren't hopeful: no one could have survived that fall. It was a tragic accident. But Matt's first wife also died in suspicious circumstances. And when the police pull a body out of the river, they have a lot more questions for Matt. Detectives Loren and Spengler want to know if Matt is a grieving, twice-unlucky husband or a cold-blooded murderer. They dig into the couple's lives to see what they can unearth. And they find that love's got teeth, it's got claws, and once it hitches you to a person, it's tough to rip yourself free. So what happens when you're done making it work?" -- Provided by publisher.
Wednesday, March 10  |  10:00 am
TBA & via Zoom - contact Holly for Zoom information

Listen to a Mystery Audiobook
Discover the magic of audiobooks.  Check out a playway audiobook or download an audiobook.
Wednesday, April 14  |  10:00 am
TRIP/OUTING TBA

Chocolate Chip Cookie Murder by Joanne Fluke
Hannah Swensen series #1
"No one cooks up a delectable, suspense-filled mystery quite like Hannah Swensen, Joanne Fluke's dessert baking, heroine whose gingersnaps are as tart as her comebacks, and whose penchant for solving crimes -- one delicious clue at a time -- has made her a bestselling favorite. And it all began on these pages, with a bakery, a murder, and some suddenly scandalous chocolate-chip crunchies. Featuring a bonus short story and brand new, mouthwatering recipes, this very first Hannah Swensen mystery is sure to have readers coming back for seconds..." -- p. [4] of cover.
Wednesday, May 12  |  10:00 am
TBA & via Zoom - contact Holly for Zoom information

The 7 1/2 Deaths of Evelyn Hardcastle by Stuart Turton
Evelyn Hardcastle will be murdered at 11:00 p.m. There are eight days, and eight witnesses for you to inhabit. We will only let you escape once you tell us the name of the killer. Understood? Then let's begin ... Evelyn Hardcastle will die. Every day until Aiden Bishop can identify her killer and break the cycle. But every time the day begins again, Aiden wakes up in the body of a different guest. And some of his hosts are more helpful than others ... The most inventive debut of the year twists together a mystery of such unexpected creativity it will leave readers guessing until the very last page.
Wednesday, July 14  |  10:00 am
TBA & via Zoom - contact Holly for Zoom information

The Giver of Stars by Jojo Moyes
"Set in Depression-era America, a breathtaking story of five extraordinary women and their remarkable journey through the mountains of Kentucky and beyond, from the author of Me Before You and The Peacock Emporium Alice Wright marries handsome American Bennett Van Cleve hoping to escape her stifling life in England. But small-town Kentucky quickly proves equally claustrophobic, especially living alongside her overbearing father-in-law. So when a call goes out for a team of women to deliver books as part of Eleanor Roosevelt's new traveling library, Alice signs on enthusiastically. The leader, and soon Alice's greatest ally, is Margery, a smart-talking, self-sufficient woman who's never asked a man's permission for anything. They will be joined by three other singular women who become known as the Horseback Librarians of Kentucky. What happens to them--and to the men they love--becomes a classic drama of loyalty, justice, humanity and passion. Though they face all kinds of dangers, they're committed to their job--bringing books to people who have never had any, sharing the gift of learning that will change their lives. Based on a true story rooted in America's past, The Giver of Stars is unparalleled in its scope. At times funny, at others heartbreaking, this is a richly rewarding novel of women's friendship, of true love, and of what happens when we reach beyond our grasp for the great beyond"-- Provided by publisher.
Wednesday, August 11  |  10:00 am
TBA & via Zoom - contact Holly for Zoom information

Sing It to Her Bones by Marcia Talley
Hannah Ives series #1
She lost her job. She almost lost her life. Now Hannah Ives is taking her first brave steps back into the world, wearing a wig and her heart on her sleeve after a frightening bout with breast cancer. But in the small Chesapeake Bay town where she came for a vacation, she does not find the relaxation she deserves. Instead Hannah finds a body -- of a girl who disappeared eight years before.  Suddenly Hannah is asking hard questions of the good and solid citizens of Pearson’s Corner, peering behind the facade of the perfect small town and piecing together the last days of a girl who died on her high school homecoming night—a girl about the same age as Hannah’s own daughter. Uncovering some dangerous secrets, Hannah can feel her own spirit and body surging back to life. After all, she beat death once. Now, with a killer on the loose, she has to face an even deadlier foe. . . .
Wednesday, September 8  |  10:00 am
TRIP/OUTING TBA

The House of Silk by Anthony Horowitz
Sherlock Holmes series #1
It is 1890. A year after Holmes's death, Watson--now in a retirement home--narrates a tale of Sherlockian detection that could tear apart the very fabric of society. The story opens with a train robbery in Boston, and moves to the innocuous setting of Wimbledon.Wednesday, November 10  |  10:00 am
TBA & via Zoom - contact Holly for Zoom information

That Darkness by Lisa Black
Gardiner and Renner series #1
A Cleveland Police Department forensic scientist and a vigilante willing to kill to make the world a safer place investigate the murder of an unidentified teen whose demise is linked to a monster who watches their every move.
Wednesday, December 8  |  10:00 am
TBA & via Zoom - contact Holly for Zoom information

Contact Holly McLain at [email protected] or 837-2217 for more information. 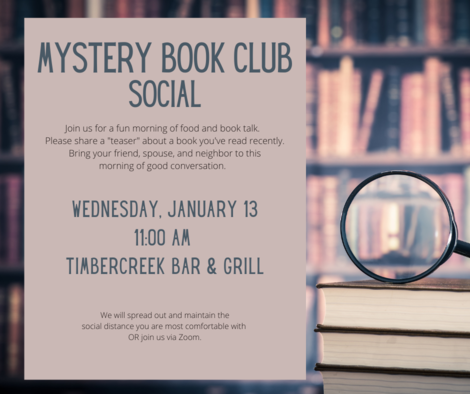