Subscribe to our email newsletter via email to keep informed of what’s happening at
your library for Adults.

Contact Holly McLain at [email protected] or 837-2217 for more information.

Members will feel free to bring portions of their writing to share with the group.  In return the group will provide gentle constructive criticism to elevate every member's writing.

“Writing a book is a horrible, exhausting struggle, like a long bout of some painful illness. One would never undertake such a thing if one were not driven on by some demon whom one can neither resist nor understand.”—George Orwell

I taught in Kansas classrooms for over forty years. The kids sitting in the desks in front of me helped me grow up, showed me a much more wonderful world was ahead of us. They were right, and it’s in their hands. My husband and I are now retired. Our five sons have given us sixteen grandchildren. I can tell a lot of stories. Before I let go, I’m writing down some things that have been dancing in my head for a long time.

The trouble with writing is so much of the story you tell is your own story, but characters shoulder in to tell it their way. Readers know it’s hard to rein in a character. Let’s just say, the truth is in the telling, not in the facts.

Here goes: We come from Western Kansas, and we’ve heard lots of stories about the Wild West, about the farmers and their hard times. But I don’t want to tell those stories. I want to write about the guy that you and I saw in the waiting room, or the little girl we didn’t know was so desperate. I want to look at people from the top of the windmill and from the sand they kick up walking. I want the tables to turn on a jerk so I can call her out. I want to escort her to the crossroads, then watch awhile, see what she does. I don’t know what will happen after that, and I don’t know if anyone will ever read a word I say about life, what it teaches me. But I do know this, a lot of truth is saved in those words. My truth, anyway.

He spent years floundering, an aimless but observant member of the lunchbox masses. Jack wasted his first go at college dallying with rugby and beer and women - becoming accomplished in the former two and less so with the latter.  He remained with the same midwestern Parks and Recreation employer for more than 30 years, a rarity in these days of disposable employees.

Jack raised a family, and with them moved to the country, south of Kansas City.  They own horses and dogs and even kept a brood of laying hens for a time.  He thought he was happy, and in many ways he was, but Jack had always kept things bottled up inside him - harboring a veritable winecellar of emotions stored underneath his middle-class life.

One day the corks began popping, and unable to verbally articulate the emotions gushing forth, he began to write them down.  Jack returned to college at the University of Kansas, where he became an honors Literature, Language and Writing student.  He earned the Peedee Brown Scholarship for Excellence in Literature Studies. and the KU English Department's Goldie L. Case Creative Writing Award.

His work has garnered other awards and has appeared in Star Magazine, United Kingdom's Prole Magazine, Kansas City Voices, Chicken Soup for the Soul, among others.

Jack’s collection of short stories, Blowing Carbon, was released in 2009, and his first novel, But Not For Me, in September, 2017.

Michon (Golding) Zurita has loved the printed word her whole life, thanks to her Mom. From a very young age, her mother made sure she read to Michon and her brother, and took them to the library in Roeland Park, KS (which seemed like a marble-infused cathedral to the small girl) and then later in Louisburg, KS. Although Michon grew up going to the Louisburg Library which has always had a wonderful selection of books and will always have a special place in her heart, at one point in her youth she decided she couldn't find the kind of books she wanted to read. So she started writing her own. As one may expect, those early efforts (written while still in grade school, junior high, and high school) were less than stellar, and some of them were down-right horrifying, but the process was so satisfying that she never stopped. Through many, many years of living life, journaling and writing for her own enjoyment, she feels she has honed her style and her craft pretty well, but knows she has much more to learn. A writer's job is never done, and there is always room for improvement and she looks forward to learning more about the craft she loves so much. Spineless creature that she is, she has never attempted to publish a single thing in all those long years of effort, but she hopes that will change, soon, and treasures the feedback and association of the other writers she has been blessed to meet at Writer's Rendezvous and in other venues.

To help make this group beneficial to all please…

Saturday, May 2  |  9:00 am
Louisburg Library
Review a Writing Submission from Jane 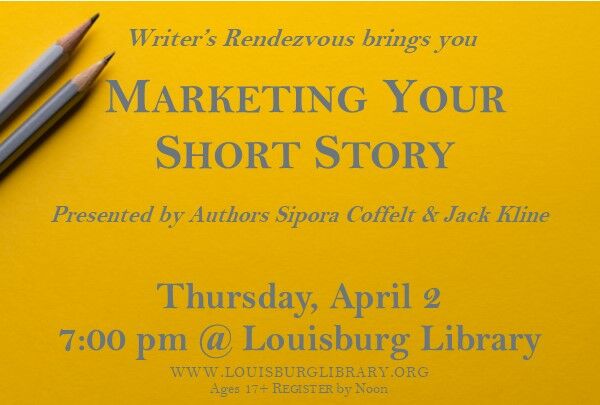 Saturday, December 5  |  9:00 am
Miss B's Cafe |  1006 S. Metcalf, Louisburg, KS
Celebrate the closing of the year!  Bring your family and friends as we enjoy breakfast and each others company. 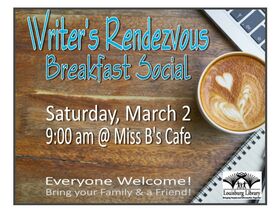